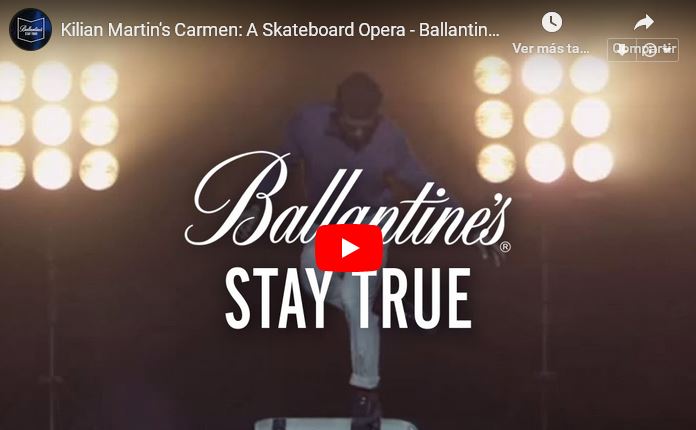 «Skateboarding Meets Classical Music: Ballantine’s Presents Kilian Martin’s “Carmen” Since bursting onto the scene several years ago, Spanish skateboarder Kilian Martin has clearly redefined flatland skating for the modern era. His effortless grace has earned him ample amounts of airplay across the Internet in addition to attracting a huge amount of admirers.

It’s these very characteristics which drew Scotch whiskey label Ballantine’s to engage Kilian Martin in a beautiful performance, pairing the unregimented ways of skateboarding with the classical nature that of the symphony. In a film titled “Ballantine’s Presents Kilian Martin’s Carmen,” the silky smooth demeanor of Martin and his board are paired with Georges Bizet’s classic “Carmen.”

The beginning stages of the video present Martin in preparation for his performance on stage, as he outlines his views on skateboarding. Eventually taking to the stage, the act expresses Ballantine’s “Stay True, Leave an Impression” philosophy. It’s this concept which looks to empower and inspire a collective conviction and self-belief that everybody has the ability to express their talents. The final act set to the high energy “Toreador Song” culminates with an intense series befitting of the mood and tone of the musical piece.»